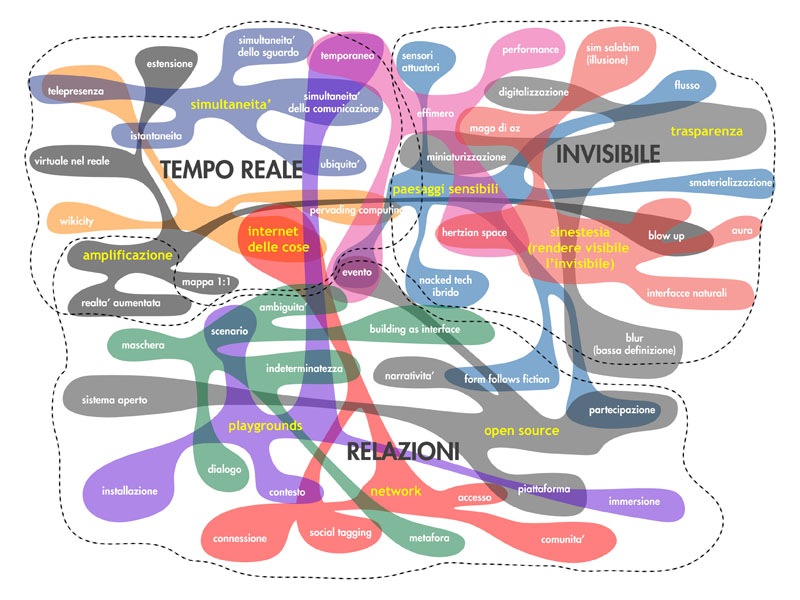 After three incredible years, at the end I’ve defend my PhD dissertation. Below you can read an abstract of the content in english and few (commented) slides of my presentation. Can really architecture get benefit from interactivity? How? What conceptual framework does inform the project of interactivity? Could the Sensible City metaphor be an interpretation key for the current discourse on modernity and contemporary?

The contemporary urban landscape is an emerging territory for interactive experiments by artists, architects and creatives of communication who design and realize installations which very often last only the time of a performance. The city thus looks to be dressed by a sensitive yet invisible and reactive skin able to perceive, decode, connect and store the multiple stimuli from the natural environment around. Its real time reactions often belong to an emotional, synaesthesic and almost irrational communication realm. The thesis’s goal is to decipher the phenomenon of the interactive experience within the city, seeking for genealogies in the experiences of the past and discussing the conceptual themes. The main idea is that the interactive design practice, through its operative and sense horizons, is an appropriate tool to interpret the many contradictions of our Contemporary urban condition in struggle with a still strong Modern vision of the world.

In the city of the Real Time, the pervasive interactive device modulates again, by means of time manipulation (synchrony/asynchrony of the communication) the concept of contiguity (tele-contiguity), presence (tele-presence, ubiquity), participation (hypervoyeurism), control (remote control) and spatial representation (1:1 mapping), extending the cognitive and operating abilities of men.

Within the Invisible City, the immaterial flows of information saturate the metropolitan air with fluid energies, ready to be “activated” by sentient and reactive membranes which make their aesthetics and sensuality visible with synesthetic restitutions.

The City of the Relations is a planetary playground where cooperative and participative social networking practices are consumed, which go indifferently from real to virtual territories because they are intimately connected by the pervasive layer of information technologies. It is an interface city, a subtitled city which is constantly deprived or increased of its memory and of its intrinsic values so that it becomes an anti-monument, for instance a non representative example of no power but only of the relations which it triggers among the people and of the narrative interconnections with other monuments.